By Lindokuhle "Dr Dream" Mnisi
Recently bodybuilders from the township of Soshanguve in Pretoria had a chance to flex their muscles in a competition that saw men and women showing off to hundreds of people in a packed Tshwane University of Technology hall.

The competition is organised twice a year by the university’s Department of Sports and Recreation and aims to promote the development of the sport in the impoverished township.”

"The aim of this competition is to motivate and encourage students to excercise and build their body muscles. We are informing the community about what's happening around them in terms of sports," says event organiser TE Nange.

The former chairperson of the South African Body Building, Mr Raphael Ntumba was with the North West University team and he says he understands the pressure TUT, as hosts, was under on the day.

"Being a chairperson was a tough job for me. I enjoyed the position even though I was doing the organizing processes on my own without support from my colleagues. I resigned to give others the chance in the position.” 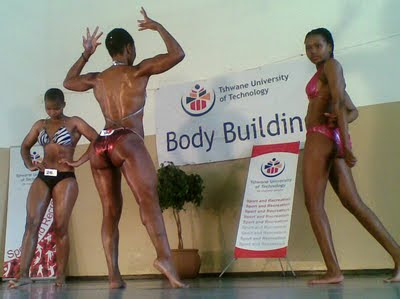 Some of the winners on the night include Muzi Zwane from TU), Thabo Takalani (VUT) and Christopher Letsoalo (TNC).

Female winners include Tina Ndaba(TUT) who has won various competitions since 2005. "I've done serious preparations for this competition, which I always do when I'm going for a competition. It helps me, I have won plenty of awards that I can't even give a straight figure," explains Ndaba.

"I do this for fun but with hard work. You need to be discipline and focus to make it in this sport," she added.

The second event for the year will be in August.
Posted by Unknown at 6:11 AM